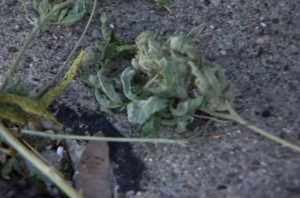 Commerce Township, Mich. — Police discovered a marijuana grow operation when a car rammed a self-storage facility door in Benstein Business Park at 8:24 a.m. Thursday morning. When officers arrived they found marijuana buds and stems scattered on the ground. According this Fox News 2 Detroit article, a renter of another unit spotted a car ramming the storage unit and called the police.

When the original officer first arrived at the scene, it was determined this a was a large scale marijuana grow almost immediately. Inside the storage unit, deputies found 25 pounds of harvested cannabis along with 30 5-feet tall marijuana plants.

It’s a lot. Not for personal use… It definitely wouldn’t fall within the guidelines of medical marijuana statute.. -Sheriff’s Office Deputy

The 33-year-old renter of the storage unit is likely face felony charges. Somehow he was notified of the incident and he showed up at the storage facility. Sheriff’s Deputies said when the renter of the unit arrived, he refused to cooperate and called his lawyer.

Police are looking over the building’s surveillance video and don’t believe the owner of the facility was aware of what was in the unit.

How to Juice Cannabis